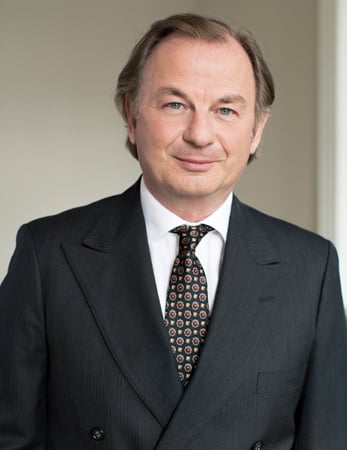 After obtaining the university degree in engineering and economics from the Swiss university (Dipl. Ing. ETH), Eidgenössische Technische Hochschule in Zurich, Christoph Schoeller entered in 1982 together with his brother Martin Schoeller the Schoeller International (engineering office) as sales manager. Schoeller International was a small family business specialized in plastic beverage crates. They took over the responsibility in 1984. Since then the brothers have expanded the Schoeller Group to an international industries and services group in four continents with a commitment to industrial sustainability, employing> 4000 people (today).

In building up the Schoeller Packaging and Logistics Group, Christoph Schoeller was responsible for sales and marketing. Since 1996 he focused on the Group’s expansion. Christoph Schoeller was managing the acquisition and turn-around of the European parcel service trans-o-flex. He was a member of the supervisory board of the globally operating logistics company Danzas Holding AG, Basel/Switzerland until it was taken over by the German Post in 1999. In 2016 he re-acquired trans-o-flex from Österreichische Post AG. He was also building up and CEO of a European family-supported venture investment company as well as of one of the top IP Licensing companies.

Under his initiative, the group established its real estate business.

From 1992 until 2010 Christoph Schoeller was also director and later Chairman and Vice Chairman of the supervisory board of IFCO Systems, a company he and his brother Martin Schoeller had founded in 1992.

Christoph co-chairs the Board of Schoeller Allibert and is a member of the Advisory Board of the Drinktec-Messe Munich. Since 2017, he chairs the Steering Committee (Steuerkreis) of trans-o-flex.